Dr. George Shank received his Ed.D. from the University of Southern California in 1976. During the 70's he taught Business Management courses and worked as a program administrator for the University of Hawaii. In 1981 he accepted a position with the University of Southern California and from 1981 to 1989 he taught Organizational Behavioral and System Management courses to master degree students. He spends his summers in Vermont at his blueberry farm, picking blueberries, enjoying the beauty, and taking long and peaceful walks with his wife and poodle. He is an avid tennis player and in 2015 was ranked 74 nationally in his age division. 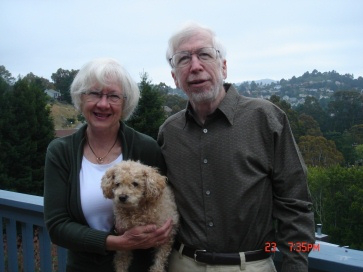 When he was restored to Christ, he took up the cause of faith and healing as it relates to mental illness. During a two-year period, he carried his message that Christ is the great healer and appeared on 24 radio stations and a New York area television station. Dr. Shank is currently involved with foreign students who have come to the United States to improve their English skills. In this ministry which he shares with his wife, God uses them to tell the gospel message to mostly Asian students, some have only a vague knowledge of Christianity. He continues to express the message that Christ is our healer and often gives private and personal witnesses to individuals seeking help and always praising the Lord for what He has done in his life by leading him from one of most difficult mental disorders where his world was pure darkness into the light and glory of a renewed life in Christ.

His non-fiction writing is Freedom from OCD where he gives an account of his life and healing from OCD, and Joyce, his wife and co-author, gives her account of what it is to live with a husband who has OCD.

His fiction writings represent the early years of his restoration. In 2015, a Christian friend read all his books and encouraged him to publish them and offered him support. They were revised, edited, and updated in late 2015 and early 2016. Each work has a well written and interesting secular plot raising compelling and current questions for secular and Christian readers. Evil Pursueth asks the questions about tolerance and response to a government that has turned evil into seductive opportunity. Fallen Angels is the story of how evil forces exist in the lives of those who deny them and are led by their passions. Schwein Here in which Lt. Schwein is wary of the normal and virtuous. He’s opinionated and suspicious but shrewd and street wise. Dr. Shank is currently writing a collection of short stories.